Cakes I Have Known 7 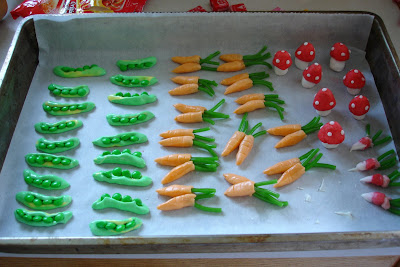 These cupcakes were for a 9th birthday party. The vegetable idea came from the first Hello Cupcake book and were surprisingly easy to shape. The peas are salt water taffy and mini M&Ms. I used salt water taffy because I couldn't find the green Starbursts recommended but I wouldn't use them again - they don't hold their shape as well. The carrots, in contrast, were made from Starbursts and they held their shape even in the intense summer heat. The mushrooms are made out of fondant. I used Martha Stewart's Swiss Meringue Buttercream. It's a little fussier than my usual icings, but I would use it again, particularly for a cake where taste matters. 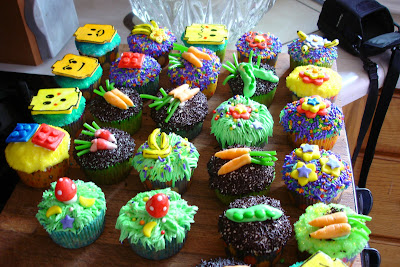 Here is a shot of an assortment of cupcakes. The LEGO heads, bricks, the flowers, bananas and mushrooms are all fondant. I used edible food writers for the details.
Posted by sheila at 8:33 AM No comments: 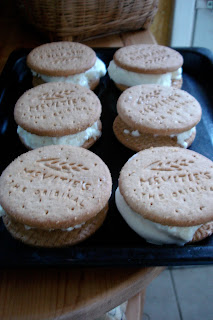 And I like fish sticks, but I love you.

I've been going mad here making ice cream sandwiches now that the weather has finally decided to act somewhat summery. I have remembered once again that unless it is incredibly, unbearably, drippingly hot I don't actually like ice cream. Not that that matters, though, because every single other person in this house adores ice cream. And there is, I admit, a certain pleasure to be gained in watching someone eat something I've made with enormous gustatory devotion.

FDPG and I trolled through Martha Stewart's ice cream offerings last week for some inspiration. As usual they are all staged to perfection. I'm one of those people who deeply admires MS (in case you hadn't noticed). Sure, she features items that look impossibly difficult to make, but she's challenging. Anyone can bake but only Martha (and perhaps Bakerella) can make it distinctive. Me, I love distinctive. Not enough of us strive for culinary distinction, if you ask me. And really, it's mostly smoke and mirrors. Go on, check out those ice cream ideas from Martha: a little coloured sugar, some fancy cake tins, and a little dramatic lighting and you too can have adorable coral-coloured fishie madeleines.
Anyhow, I noticed (I might even have gasped a little) that Martha was using purchased ice cream. She hadn't lovingly churned it in her imported-from-Italy made-especially-for-her-by-Ladurée-or-someone-like-that ice cream maker (you know, the one that only uses imported French rock salt from the deepest cracks in the Pyrenees)! After I recovered from that little shock and considered how hot it would make my kitchen to bake cookies for ice cream sandwiches, I thought "Heck, if Martha can use purchased ice cream I can use purchased cookies."

I bought a package of oatmeal cookies. Biggish ones. I even squeezed the packet a bit to make sure they were not the hard-as-nails variety, because I figured those would shatter when frozen. I also bought some vanilla ice cream. We've bought a lot of vanilla ice creams around these parts (two summers ago we got a teeny bit obsessive about making ice cream cakes) and in our opinion the best are not the tiny-horribly-expensive-promise-you-the-world premium vanillas but the big round pails they sell at big no name stores. They taste like the ice milk they sell at Dairy Queen, an ice cream even I like.

So, you've got your cookie. You've got your ice cream. The idea is this: you let your ice cream soften a bit, then you scoop out some with a big round spoon, keeping the scoop rounded. Plop it on one cookie, then top with another cookie, pressing gently. Tip: I lined my cookies up before doing this.

I made them in batches of six at a time, because our ice cream was of the Fast Melting variety. You need to have a really cold freezer (which in my case was not the fridge freezer) so they harden without oozing out of their little cookie prison. 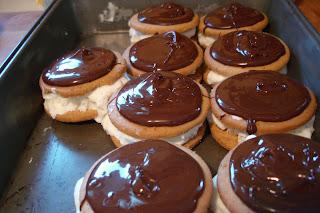 After that I melted some chocolate chips and plopped a bit spoonful on the frozen cookie sandwich. Smooth it out towards the edges and place in freezer until firm. If you were feeling so inclined you could even sprinkle something on top of the melted chocolate.

By the way, I've used Hob Nobs, Digestives, and regular bargain brand oatmeal cookies and they've all been received enthusiastically, but if you want to make your own chocolate cookies or something along those lines check out the Martha link because she has recipes.
Posted by sheila at 7:12 AM 2 comments:

I only made this because someone had given me a bucket of old-ish cucumbers and they looked too ugly to do anything else with them. Well, that and the fact that I am always looking for an opportunity to avoid anything containing high fructose corn syrup (HFCS) and summer dinner condiments are filled with HFCS: relish, ketchup, mustard, etc. So I made this, expecting a ho-hum result mostly because of the state of the cucumbers, but was quite impressed to find that it was a seriously good relish. So good I now have 12 cucumber plants in the garden so I can make more of this stuff...
7 c prepared cucumbers (peeled and chopped)
4 c chopped green peppers
4 c chopped red peppers
2 c chopped celery
1 c chopped onion
1/2 c pickling salt
2 & 1/4 c sugar
3 c white vinegar
4 Tbsp each: celery seeds and mustard seeds
Combine cucumbers, peppers, celery, onions and pickling salt in a large glass or stainless bowl. Cover and leave 4 hours. Rinse vegetables well. Press out excess moisture. Combine sugar, vinegar, and spices in a large saucepan. Bring to a boil. Add vegetables and bring back to boil, then boil for 10 minutes.
Can as per usual. Makes 7 pints.
Posted by sheila at 7:21 PM 1 comment:

I got this from the Bernardin site a couple of years ago. For something that looks rather pedestrian in print, this peach pie filling is astoundingly fragrant and delicious. All three of my kids have exclaimed out loud when I serve it. Usually what I've done is make turnovers with it, using puff pastry. It's also nice over yogurt or ice cream. The original recipe includes a cup of golden raisins but as I've never tried it that way I can't comment.
12 c prepared peaches (peeled, pitted, and roughly chopped)
two 3" cinnamon sticks
2.5 tsp whole cloves
2 & 2/3 c white sugar
2 c peeled, finely chopped apples
1/2 c lemon juice
1/4 c white vinegar
2 Tbsp grated lemon rind
1/2 tsp grated nutmeg
Place cinnamon and cloves in a tea ball or cheesecloth. Combine peaches, spice ball, sugar, apples, lemon juice, vinegar, lemon rind and nutmeg in a large saucepan. Bring to a boil, then boil gently for 35 minutes, stirring occasionally until thickened. Remove spice bag and can: makes 4 pints.
Posted by sheila at 7:13 PM No comments:

This is based on a recipe I saw in The Herbfarm Cookbook by Jerry Traunfeld, a seriously excellent cookbook for the herb gardener.
1 cup sugar
3/4 cup water
Your choice of herb (ie: a fistful of mint, some rosemary, lemon thyme)
Bring the water and sugar to a boil in a stainless steel saucepan, stir until the sugar is completely dissolved, then toss in the herbs and clamp the lid on the pot. Leave it for at least 1/2 hour, then strain.
I usually let this mixture cool then pour it into freezer bags. I also usually triple the recipe, which means tripling the herbs (good use for all that mint spreading around your garden!).
Posted by sheila at 7:58 PM No comments: 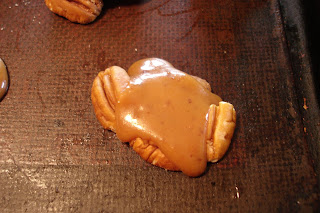 These are easy to make, surprisingly enough. And you finally get a chance to use that candy thermometer gathering dust in the drawer (um, well, mine was).

First, put some pecans on a baking sheet. The sheet must be lined with either parchment or a silpat. Group the pecans in threes or fours (see the picture to the left - 4 pecans under all that caramel).


Next, make the caramel.

First, melt butter then stir in the sugar. Bring to a boil. Add syrup and bring to a boil again then add the milk. At this point you must stir it continuously and stick the thermometer in it and keep stirring until the temperature reaches 238ºF. Remove from heat and stir in vanilla then let it sit, stirring briefly, until it stops boiling and bubbling (5 minutes or so). 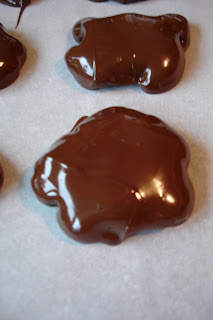 Once it starts to harden up a bit (this is a bit nebulous I realize but fiddle around and keep calm and you'll soon see what I mean) you can drop it by teaspoonfuls over your little piles of pecans.

Then let them sit for at least a couple of hours, until the caramel is good and solid.

Then melt yourself some chocolate (dark or milk, the choice is yours) and dip them, again using either a silpat or parchment on a cookie sheet.

I halved this recipe when I made it, just because it seemed like such a lot of butter, and it made about 4 dozen turtles, so know that while it seems like a lot of butter and sugar and such, it actually makes a whack of candy.
Posted by sheila at 10:14 PM No comments: